During the investigation of the Sultana explosion, direct testimony by witnesses and experts was reviewed to better understand the causes of the explosion and perhaps finds clues that others had missed.

The testimony of R.G. Taylor, the boilermaker who repaired the leaking Sultana boiler in Vicksburg, Mississippi, included: “As long as there is a sufficiency of water in the boiler, there is no danger of explosion.” Knowing this now to be very much untrue, it led to a search for what engineers and boilermakers in 1865 understood about steam and explosions.

Boilermakers and engineers believed that the cause of most boiler explosions was low water. This theory hypothesized that low water allowed a boiler plate to be exposed to the fire, overheat and turn red hot. Then, when water struck the plate, it instantly turned to steam over pressurizing the boiler and resulting in an explosion.

In addition, they believed that much of the energy was in the steam. An excess of steam was often cited. The low water theory proved to be deficient.

Significant scientific investigations of steam and steam power took place in the early 1860’s through the 1870’s resulting in the science behind steam explosions quickly advancing. Robert Thurston, the first President of the American Society of Mechanical Engineers (ASME), published “Steam Boiler Explosions, In Theory and Practice” in 1887.

By that time, two things had become clear that weren’t obvious earlier.

The figure below is an early table that shows the amount of energy stored in a boiler. According to this data, the energy contained in a plain tubular boiler was sufficient to launch the boiler 5,372 feet. Yes, 5,372 feet – over a mile high!

The table also shows that the steam in the boiler stores less than three percent of the total energy in the boiler and that the water stores most of the energy. Therefore, a boiler full of water has more energy stored and available for explosive power than a boiler low on water. 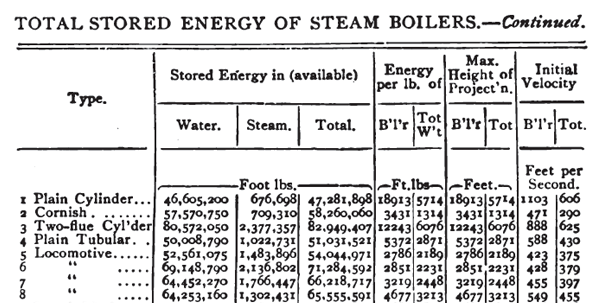 Putting it in perspective

Water in a pot on the stove boils at 212°F. As pressure increases, the water’s boiling temperature also increases. For example, at an operating boiler pressure of 145 pounds per square inch (psig), water boils at a temperature of 363°F.

If there is a break or leak in the boiler, the pressure inside immediately drops. With this drop in pressure, the temperature at which water boils also drops. The water temperature in the boiler will then be greater than the boiling temperature. Therefore, some of the water will flash to steam, expanding and re-pressurizing the boiler.

If the opening is small and the boiler is strong enough, the pressure will be contained and the water or steam will steadily leak out as the boiler remains intact. If however, the boiler cannot contain the pressure due to a weakened condition, the result will be an explosion as more and more water flashes to steam and rips the openings wider almost instantaneously. Overall, the weaker or more brittle the boiler, the larger the explosion will be.

The next post will review the most commonly cited cause of the Sultana explosion.

© 2015 The Hartford Steam Boiler Inspection and Insurance Company. All rights reserved. This article is intended for information purposes only. HSB makes no warranties or representations as to the accuracy or completeness of the content of this article.