Tesla gave the world alternating current electricity. The electrical industry today is driven largely by the discoveries and inventions of Tesla. The present systems of alternating current generation, power transmission, three-phase motors, radio and remote control are all thanks to Tesla.

The next time you are visiting New York City, you may want to visit the place where Nikola Tesla resided
for the last ten years of his life. After visiting the Statue of Liberty and other common tourist sites, be sure to remember to give tribute to the man who contributed greatly to our modern electrical world. 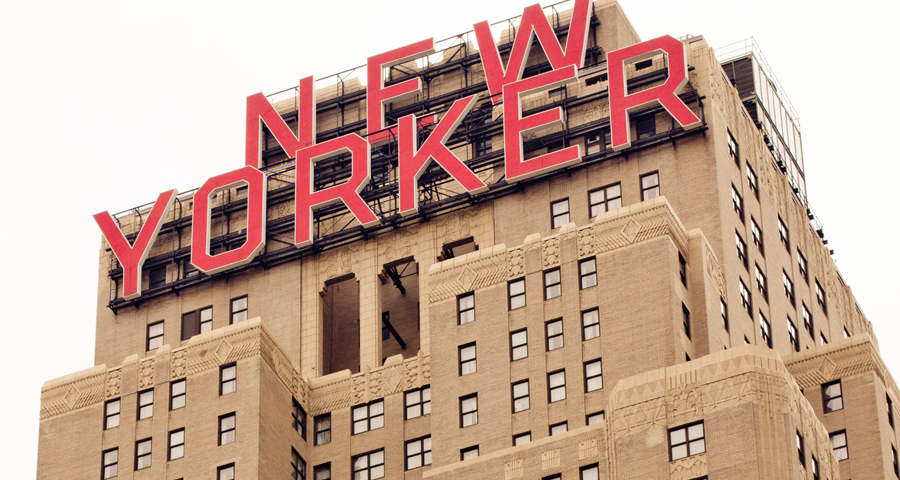 Tesla lived on the 33rd floor of the hotel for ten years. Tesla had a fascination with the number three and
chose this floor because of the double three. Whether it was garments, tableware, or food items, the
quantity of anything he used had to be divisible by three.

Tesla’s actual room number was 3327. This number represents the 33rd floor of the hotel and the 27th
room on the floor. Not only is the number 27 divisible by three it is also 3³. 3 x 3 x 3 = 27! If you want to
feel electrically enlightened, you can actually book this room for a stay at the hotel. 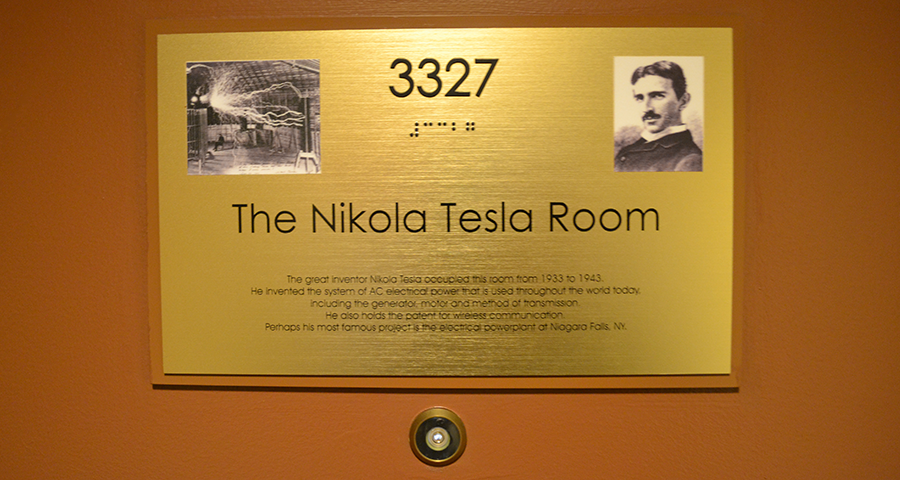 When Tesla lived in the New Yorker, his suite included the room adjacent to room 3327. Today this is
room number 3328 and is called the Nikola Tesla Study. A wall was built in the main hallway that entered
into both rooms. Today, the special hallway wall is gone and the study room is also bookable.

In the lower level of the New Yorker Hotel, you can see a tribute to the man who gave us the alternating
current system used throughout the world today. The display includes old letters signed by Tesla and
photos of Tesla and some of the personal items from his room. 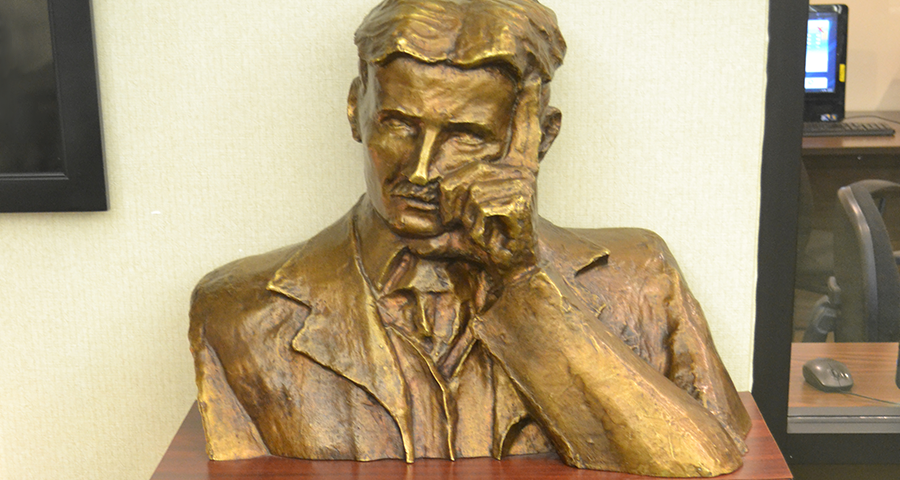 Many of Tesla’s accomplishments and inventions are shown in this collage. Tesla battled with Thomas
Edison in the War of the Currents. Edison promoted the use of direct current while Tesla pushed his
new alternating current ideas. Tesla won the battle. His ideas for alternating current generation were
soon demonstrated with the building of a hydroelectric power plant that harnessed the power of Niagara
Falls. It was a childhood dream that he would someday harness the power of Niagara Falls. 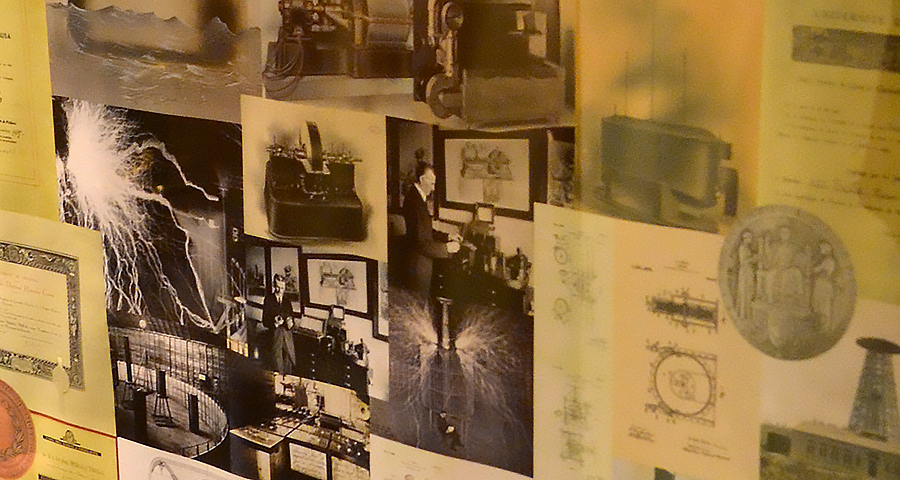 Guglielmo Marconi used many of Tesla’s patented ideas in his work with radio. Tesla sued Marconi for
patent infringement. After a long court battle, the United States Supreme Court overturned Marconi’s
radio patents in favor of Tesla. Unfortunately for Tesla, the court made this ruling eight months after his death in 1943.

One of the many benefits of using alternating current versus direct current was the elimination of the need for a commutator. Commutators used in direct current dynamos, were the source of many equipment failures. The carbon brushes had to be adjusted correctly to minimize sparking at the commutator bars. Special compensating systems needed to be built into the motor to prevent commutator sparking as the motor load varied. 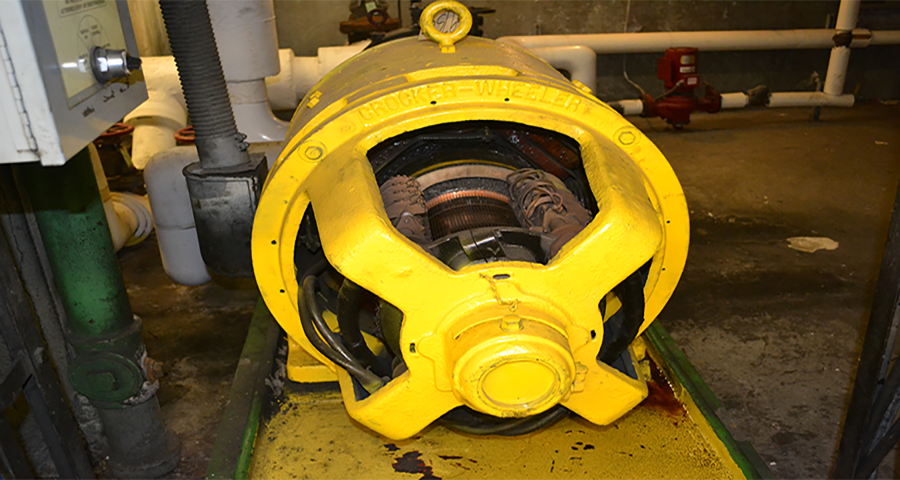 There is a lot to do and see when visiting New York City. If you love history or science, you won’t want to miss the chance to walk the same hallways used by Tesla and enjoy this tribute to his significant contributions to mankind.

© 2017 The Hartford Steam Boiler Inspection and Insurance Company. All rights reserved. This article is for informational purposes only. HSB makes no warranties or representations as to the accuracy or completeness of the content of this article. Under no circumstances shall HSB or any party involved in creating or delivering this article be liable to you for any loss or damage that results from the use of the information or images contained in this article.